​The Jewish path of Yossi Abramowitz, solar energy pioneer
In the last few years, a new genre of documentary films has come into being, often called “impact filmmaking”. Impact filmmaking is designed to not only tell a story for an audience in a movie theater. In addition, impact films can be used to educate and dramatically inspire people regarding crucial social issues, and even to motivate communities to action. Impact films, unlike conventional films, can be screened not only in public theaters - but for specific communities in synagogues, schools and universities, non-profits, corporations, and elsewhere.  Engaging post-screening discussions and even “action plans” can be part of such screenings. Impact film projects invite maximum participation, both during the filmmaking, and in the screenings.

When our film is finished, in addition to screenings in movie theaters, on TV and streaming online, our project’s Impact Team will present many impact screenings for adults and teens - across North America, Europe, Israel, and elsewhere. Our project budget includes creating an engaging Study/Discussion Guide, adaptable for anything from a single screening/discussion event, to an in-depth workshop, lasting several sessions.

Our feature documentary project, “Green Rebel - the Adventures of Kaptain Sunshine” is an ideal impact filmmaking project, as its main character, Yosef Abramowitz charismatically and courageously embodies some of the most pivotal issues of our time. From the start, our film is designed to be used to train Jewish and other community leaders in the use of media for tikkun olam - to inspire and motivate activism and social change. 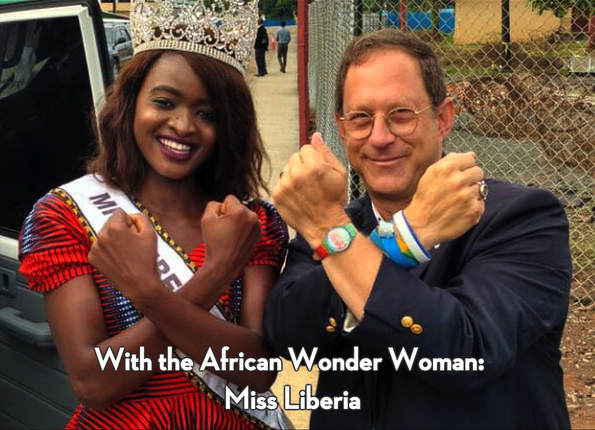 ​We have been filming Abramowitz’s activities for approximately one year, within Israel. We are now entering the second half of our production process: this fall and early winter is a crucial time in his work in Africa. He intends to make several trips to meet African leaders and sites where his solar fields will probably be built: this includes to relatively stable Lagos (Nigeria’s capital, in the south of the country), and unstable northern Nigeria (where Islamic terrorists will necessitate strong security for his visit); South Sudan (which is still recovering from two years of civil war); and in East Africa, probably Ethiopia and Rwanda.

Funding for this phase will allow us to accompany Abramowitz on these trips, as he ventures through difficult circumstances, developing relationships, sealing deals and trying to break ground on new solar fields. And Ethiopia may host a pan-African business conference in the winter, which will be attended by many Israeli businesses (as well as Netanyahu, who has recently talked extensively of “Israel coming back to Africa”).

Our video camera will closely follow Abramowitz, documenting both his public activities, and his private reflections. When we return to Israel, the funding will also allow us to edit the crucial African footage into our story, as well as to continue building ongoing bridges with Jewish leaders and communities in Britain and the United States, and to initiate several internships in Jerusalem (where both our film production company and Abramowitz’s solar energy company are based), for young American and British Jews to become an integral part of our research/production/impact team.
​
In our final phase (not included in this funding request) we will continue to video in Israel, and perhaps make 1-2 additional trips to Africa in Spring, 2018. Our goal is to finish shooting and editing our movie by December, 2018, and to commence screenings (both in theatrical release, and in special impact screenings) soon afterwards.

Our project will tell an essential story of tikkun olam, of a Jewish social action pioneer in the service of addressing inequality in Israel’s neighboring continent, and in creating a new and much needed model to address the climate crisis.
Brief Financial Considerations
(More complete budget available on request) 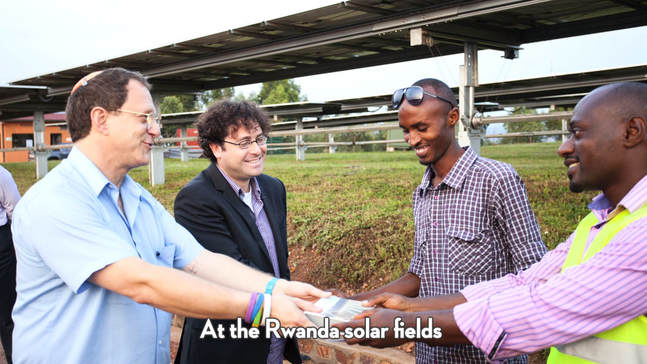 Yosef Abramowitz and his family arrive in Israel in 2006, from their home in Boston. For five long years, he navigates bloated government bureaucracy, the natural gas oligarchs, and a few angry threats by local henchmen. In one encounter, caught with a hidden mike, Abramowitz intentionally uses the famous language of Israel’s pioneer founders, telling several antagonistic sabra (Israelis born in Israel) competitors in the energy market, “We came to build and be built - just like you.“ Their immediate response, “We’ve been here four generations, don’t tell me about building the country!”

Nonetheless, in 2011, Abramowitz’s company, Gigawatt Global, opens its first Israeli solar field next to Kibbutz Ketura in the Arava desert, and his company is the first to be approved to connect to the Israeli national electricity grid (with a Power Purchase Agreement worth about $70 million).

He doesn’t stop there. A short three years later, Gigawatt finishes the first solar field in East Africa, in Rwanda - it will supply 6% of the nation’s energy needs. Touchingly, it is situated in Agohozo Youth Village, where several hundred orphans of Rwanda’s own genocidal war study and live.  Abramowitz proudly asserts, “It is a game-changer for humanity and the environment.” Ever the publicist, Abramowitz lures Bono, senator Al Franken, and congressman Joe Kennedy, to ceremonies at the new Rwandan solar field.
​ 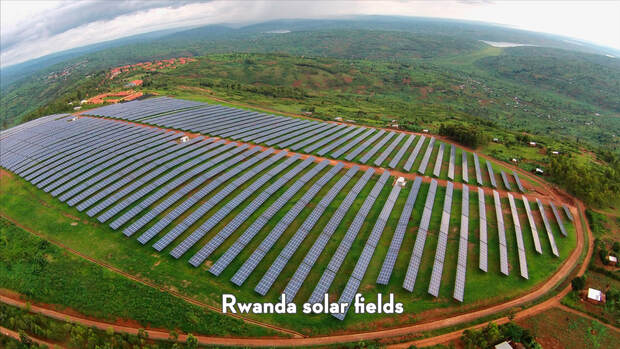 In the next few years, avoiding government corruption, instability, and violence (one solar site had to be quickly evacuated), Gigawatt Global inks deals with ten additional African countries for their own solar fields - to provide electricity to many thousands for the first time, and to replace diesel, the dirty fuel that is the dominant source of electricity in Africa. In the international media, Abramowitz is now starting to be informally called, “Captain Sunshine.”

Abramowitz dances with whatever global power brokers will dance with him - including President Trump, who wants to “fight jihad” in Africa and elsewhere, and whose U.S. loan guarantees could grease any solar deal.

We will tell a brief version of Abramowitz’s early struggles, using footage shot over the last several years of his activities (most of it shot by our director Harvey Stein, a Jerusalem neighbor and friend of Abramowitz). Then we will shoot extensively in Fall 2017 through Fall 2018, in Israel and in several African countries. We will also possibly use Abramowitz’s iPhone footage from his travels, and his sneaky storytelling eye.

Our main narrative will focus on Abramowitz’s struggles in Israel and in one specific West African country - to ink a deal and then successfully build a field. We will make several trips to Africa with Abramowitz as part of our filmmaking: in one African country recently, he went to the electric company (the company due to sign the deal with Gigawatt), and refused to leave their office until they signed the Agreement. Why all the delaying? According to Abramowitz, African officials often stall to encourage a bribe to sweeten the deal. Gigawatt’s staff messages Abamowitz at his late night sit-in, to give up. But at 2 a.m., the electric company drops its excuses, and the deal is finally signed.

Corruption, poverty and traumatized populations, ex-warlords and ex-dictators (some of them the first elected president the country ever had). In our selected country, we will follow Abramowitz as he finds one local ally, a supporting character in our story - probably a younger local African, idealistic and hopeful like him. Abramowitz often builds bridges through religion - local Africans are usually Christian or Muslim, and he connects with them as a devout Jew, living in Jerusalem, a holy city to all three monotheistic religions.

How does Abramowitz sustain his difficult activities? Abramowitz’s “doing good” started very early: as a young teen in Boston, he did anti-nuclear activism with his mom, then in his college days made headlines promoting rights of Soviet Jewry and against South African apartheid. What did he learn about persistence, through sit-ins and several hunger strikes? And how does he use his own Jewish observance as a way to “recharge” his own personal batteries?

And what about his own family? Abramowitz’s wife, Rabbi Susan Silverman, has been a pivotal member of Jerusalem’s “Women of the Wall”, who have struggled for many years against the Orthodox power structure at the Western Wall, to allow women to be able to openly pray there. Rabbi Susan and their teenage daughter Hallel were arrested in 2013 by police at the Wall, and their youngest daughter Ashira was spat on during the same attempt to pray there). How is his “troublemaker” family, and Jerusalem itself, his laboratory for strong Jewish and activist causes?

How does Abramowitz manage his delicate balance? He and his wife loudly condemn Netanyahu’s recent reneging on the plan for a new mixed prayer area next to the Kotel, the Western Wall. But all the while he knows he needs Netanyahu’s support in Africa.

Can Abramowitz ruthlessly promote his solar energy company, working with the power brokers of his world (from Trump and Netanyahu, to assorted African leaders and ex-dictators) - and still maintain his goal, as he simply calls it, of “doing good”? Can he follow his dictum - applied both to Israel and the wider world - that “disruptive theologies and disruptive technologies are both idol smashers and monopoly busters”? How does Abramowitz’s unique Israeli identity make possible his groundbreaking work?

“Idol Smasher, Monopoly Buster” will be both an intimate, human-level family story; and an international tale of finely-honed, business chutzpah, working very hard to ink multimillion dollar deals in the service of clean, sustainable energy production from the sun. ​​ 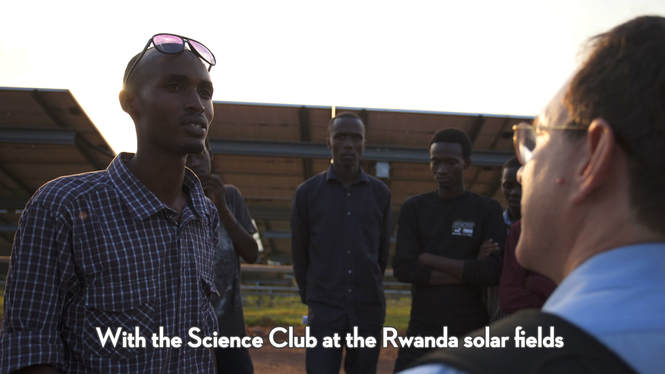 Vered Post (co-writer, outreach facilitator) is an Israeli-American writer and educator. She co-wrote an Israeli feature film, was a co-writer for the original Israeli/Palestinian Sesame Street, and has presented a variety of workshops using films and filmmaking, in Israeli schools and other institutions, as well in New York State.
​
We are looking for investors for our impact film project.
Contact us to look at our Business Plan or Investor Agreement: jerusalemnewyork@gmail.com